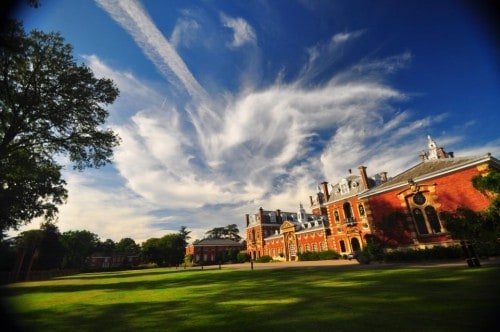 On 20th April the Future Foundations team returned to Wellington College, this time to run a fun and engaging International Exchange with 36 Year 6 students from Eagle House and Wellington Tainjin. China. The day was supported by 8 fantastic L6 Wellington students and was designed to build confidence, develop teamwork skills and to integrate groups of students from across the globe who otherwise may never have met.

I enjoyed the experience a lot. I learned a lot and it was interesting mixing with strangers I got to know the in the end.

I learnt a lot and I was inspired to pursue my dreams.

Working hard as a team made me more confident.

It was enjoyable and I learnt loads I cant wait to do this again if I can.

I will never give up thanks to Future Foundations.

We began the day by welcoming the students, asking names and mixing the groups up to ensure the 2 groups were integrated. We briefly ran through the aims of the day, the timetable and checked in with how everyone was feeling – a few nervous faces but lots of excitement in the room which was fantastic! We then went outside and played a group ice-breaker to get everyone moving and having fun from the get go. Human shapes was a perfect choice as it was physical and fast-moving – the finale was a group pirate ship which was incredibly impressive!

The students then split into their groups and began to work on a team name and team chant. This was something they returned to throughout the day and was a fantastic way of building rapport within the teams; it also encouraged some healthy competition between the 3 groups. Afterwards they began thinking about setting simple goals for themselves and the steps they might take to achieve them.

After lunch we played Toxic Dump as a group which was huge fun and made the groups understand the importance of effective team work to achieve a shared goal. This was at times challenging especially given the language barriers but everyone learned a huge amount about the need to communicate clearly and effectively as well as the importance of cooperation and coordination.

The teams then returned to their groups to tackle the marshmallow challenge and finally to discuss what they had learnt over the course of the day and to create a team poster to present in the reflection session at the close.

We closed the day with a group reflection on everything the students had covered from personal goal setting to effective teamwork skills. The groups opened with their team chant and then presented their team poster to the group. It was fantastic to see how much the students had taken from the day. Most of them were thrilled to have had the opportunity to make new friends from the other side of the world and we were pleased to have facilitated this.

Percentage of participants who now feel that they can take responsibility for our their future.

Percentage of participants who feel they can now pursue passions

Percentage of participants who feel they can now be true to themselves.

If you are interested in bringing Future Foundations training to your school please contact jon.harper@future-foundations.co.uk to explore how we can help your students to reach their full potential.